Sheikh Lotfollah Mosque is one of the most exquisite mosques in Iran and the Islamic world. A mosque that Professor Arthur Pope hardly considers a manmade monument. The construction of Sheikh Lotfollah Mosque began in 1602 AD by the order of Shah Abbas the Great. He wanted to build this mosque for his father-in-law, Sheikh Lotfollah Jabal Ameli. Professor Mohammad Reza Isfahani put 18 years of effort in the construction of this mosque. As for Sheikh Lotfollah himself, he was one of the greatest Shia scholars who lived in Jabal Amel, Lebanon. Shah Abbas invited him to come to Iran. Then, Sheikh Lotfollah came to Iran and spent some time in Mashhad and Astan Quds Razavi. He consequently went to Qazvin after the Uzbek invasion. At last, as he accepted Shah’s invitation, he set foot in Isfahan.

This mosque is known as one of the most unique mosques in Iran for several reasons. Some of these reason are:

Accordingly, many architects and historians believe that the Sheikh Mosque was not a public mosque. Sheikh Lotfollah Mosque was built for the use of noble people. This means that this mosque was not a Jameh Mosque (the central mosque of each city). Accordingly, unlike the Abbasi Jameh Mosque and the Atiq Jameh Mosque, it was not built for hosting a large public. They believe that this mosque was intended for the place of worship used by the king and his wives. Also, during some hours, it was used as a theology school.

Before entering the mosque, one can see a beautiful range of tilework in azure blue, yellow, green, etc. at the entrance. This type of tilework is called ‘’seven-color’’ or ‘’ Haft Rang’’. There are pros and cons behind using seven-color tiles. The making of such tiles is faster and requires less effort. This is for the reason that most of the colors cook at the same time under an average temperature. In this way, a large number of tiles can be prepared in a short time. But the durability of these colors is less than Moqali tiles and they fade over time.

There are small inscriptions on the gate of this mosque which indicate one of the mottos of the Safavid Dynasty. ‘’This is the city of knowledge and Ali is the gate to it’’. Shah Abbas’ special devotion to Ali, the first Imam of the Shias, was the reason that these kind of mottos were seen in Safavid mosques and buildings.

The Marble Stones at the entrance were set for the pedestrians and possibly the theology students to seat and rest. Shah Abbas the Great was in a hurry to build the square and all its other elements. He wanted the construction plans to go as quickly as possible. When marble was needed for the mosque, Shah ordered the destruction of part of the Jameh Mosque of Yazd. He wanted its marble to be used for the mosques of the square. Immediately after hearing this news, the mullahs reluctantly asked him to change his mind. One of them warned Shah Abbas that if he destroyed the Jameh Mosque of Yazd to build his own mosques, the future of Safavid buildings will end up the same. It a few days, fortunately, the news of the discovery of the Ardestan marble mine reached Shah which made him change his mind.

What goes on inside Sheikh Lotfollah Mosque?

Before going through the corridor, your pupils are nearly closed due to the intense light it has received under the sunlight in the square. When you suddenly enter the dim corridor, you only have an overall view of the inside. But as you walk through the hallway to the main part of the mosque, your eyes step by step get used to the light. The architect, accordingly, has used the role of light to make the visitors have a more amazing experience when facing the masterful parts of the mosque.

So in summary, the visitor has to walk through a 20-meter long hallway. At the end of the hallway, there is a marble window which is the only source of light in the hallway. With its special patterns and designs, this window is considered as one of the most unique parts of the mosque. While walking, the visitor’s eyes gradually get used to the light. This is where more details such as decorative elements, seven-color tiles, and beautiful arches come into view. After 20 meters, the visitor, who is fascinated by the beauty of this mosque, is lead to turn 90 degrees to the right. Now, s/he is suddenly confronted with a unique sight. There is almost no one that has not been thrilled by this scenery. The 90-degree turn that we mentioned would take the visitors in the direction of the Qibla when they get to the main vault of the mosque. It is notable that Muslims should face the Kaaba while performing their religious duties (this building is located in the city of Mecca in Saudi Arabia). For this reason, the main direction of all mosques is designed towards the Qibla.

What goes on in the heart of the Mosque?

The main vault of the mosque has a pleasant atmosphere. This vault with a height of 38 meters has a single-shell dome and several marble windows. All in all, every element is there to guide the natural light which itself is a guide of nature, into the building. Direct light and even its reflection are reflected on the inscriptions and tiles in an artistic way. The mosque benefits from natural light almost all day long. The inscriptions include verses from the Qur’an which are masterful works of calligraphies by Alireza Abbasi, the calligrapher of Shah Abbas’s court.

Architects of Islamic architecture have made the most of the principles of Islam in the design and construction of buildings and mosques. Turning a square space into a circle is one of these special techniques and designs. For this, the architect add more squares to the existing squares to make a hexagons and then a square made of thirty-six and sixty-four sides. Gradually this would bring the square to a circle. In mysticism, the square is considered as the symbol of earth and materiality. The circle, on the other hand, is considered as the symbol of infinity and immortality. Accordingly, they believe that the circle represents the spiritual and divine aspects of life. Human beings too should walk from worldly materials and belongings just like the increasing sides of a square. At the end of their path, they can then step into the world of infinity and immortality, which is the circle.

As we mentioned before, there are a few people who would not be amazed by such beauties and forget the beautiful shadow resembling peacock feathers on the roof of the ceiling of the mosque. This mosque with its cream-colored dome, which is an exceptional color among other mosques in Iran, is a significant gem for Naqsh-e Jahan Square.

When is Sheikh Lotfollah Mosque open?

What hotels are near Sheikh Lotfollah Mosque?

What attractions are near Sheikh Lotfollah Mosque? 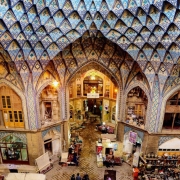 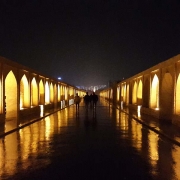 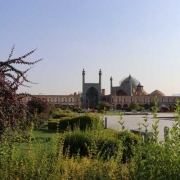 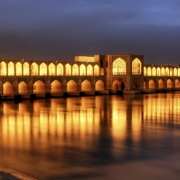 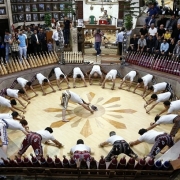 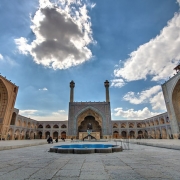 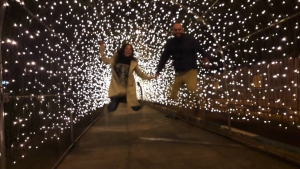 16 Tips for Choosing the Best B&B in Iran